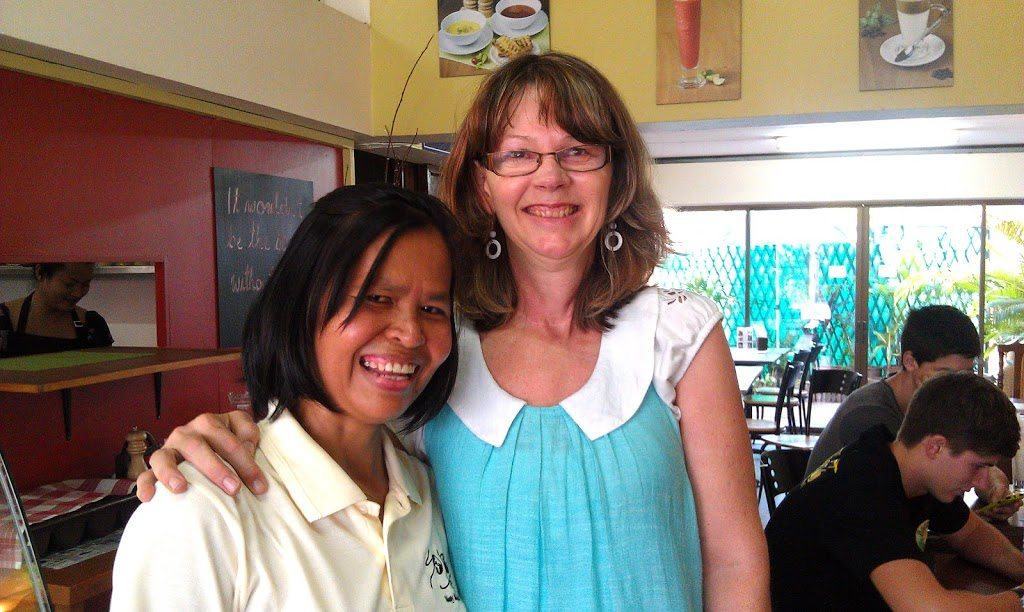 Recently a couple from Australia, along with their teenage kids came to visit The River. During a conversation with The River Team member, the wife called Elise,  inquired about a Thai lady called Joy. She wanted to meet her.  Elise said that she has been praying for Joy since she received a River prayer card about six months earlier in Australia. One of the reasons Elise picked Joy’s card was because her own middle name is Joy! Elise had no idea of the life and struggles this Thai lady, called Joy, had endured. She did not know that Joy is a single mother of two and a breast cancer survivor, who is trusting in God as her Almighty Provider and Healer. Elise was overjoyed in hearing Joy’s story, because she herself had been healed of cancer!
The day we phoned Joy, she had been asking God to send her encouragement.  It was an unusually difficult day at the bakery she works in and she felt tired and alone.
The meeting of the two women at our River Café was truly joyful! The two discovered how much more than their names they shared in common. For almost an hour, these two daughters of the Father chatted about their families, children, and about how Jesus had individually impacted them and cared, loved and healed them and changed their lives for the Glory of God.
God brought these two beautiful women together through a simple River prayer card. Today they are praying for each other and giving praises to God in their homes thousands of miles apart.